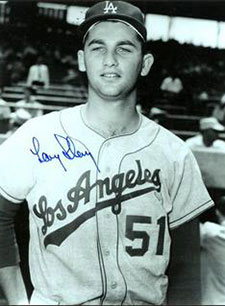 Larry was a right-handed relief pitcher mostly with the Detroit Tigers and Los Angeles Dodgers. He was most valuable player of the 1959 World Series when the Dodgers won its first championship after relocating from Brooklyn.