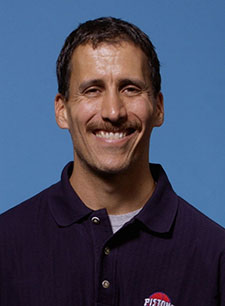 Arnie is entering his 25th season with the Detroit Pistons, serving as a consultant to the club’s medical staff for the second consecutive year. From 1992-2015, Arnie was a vital part of the team’s medical staff, serving as strength and conditioning coach. His unique rehabilitation methods and recovery approach made him one of the NBA’s top sports medicine and rehabilitation experts.

His duties included the prevention, treatment and rehabilitation of injuries. An innovator in the field of injury prevention, sports rehab and physical conditioning field, Arnie is renowned in the professional sports world for his methods of application. He’s designed recovery and workout programs that have proven to be quite successful. He’s received credit for expediting the development of Detroit’s young players while maximizing the conditioning and overall health of the team’s veteran group. His methods emphasize stretching, core strength and utilization of strengthening muscle groups associated with specific basketball movements. While working for the Pistons, Arnie consulted and developed conditioning programs for some of the Detroit area’s finest professional and amateur athletes.

Arnie began his career as the sports coordinator at Crittenton Fitness Institute and then moved to Rochester Knee and Sports Therapy where he worked as a staff therapist. He began his association with the Pistons while working at Rochester Knee and Sports. He left the Pistons organization to join former head coach Flip Saunders at the Minnesota Timberwolves in 2015 and oversaw the sports medicine program for two seasons.