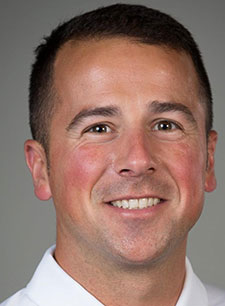 Cale is head coach of the Southern Illinois University-Edwardsville men’s soccer team. Most recently he was recruiting coordinator and assistant coach at MSU for four seasons. He previously served as head coach for the Under-18 USA Youth team for Maccabi USA, and as associate head coach for Detroit City FC in the NPSL. Cale graduated from Saginaw Valley where he played soccer four years. His coaching career began as a volunteer for Saginaw in 2006.

Prior to Michigan State, Cale served as the head coach at Division II Saginaw Valley State University, where he guided the program to its first three NCAA Tournament appearances in 2011, 2012 and 2014. He led the Cardinals to the National Championship game in 2012 when the team set the program single-season record with 18 wins. Cale was recognized as the 2012 NSCAA National Coach of the Year. He also earned recognition as the Great Lakes Intercollegiate Athletic Conference (GLIAC) Coach of the Year in 2011 and 2012. He amassed a
five-year record of 64-23-15.

Cale spent the 2008 and 2009 seasons as an assistant coach at Lewis University of the Division II Great Lakes Valley Conference. The Flyers made two NCAA Tournament appearances including advancing to the Final Four in 2009 and the Regional Championship match in 2008.