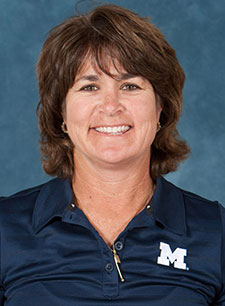 Ronni is head coach of the University of Michigan women’s tennis team, a position she’s held since 2007. She’s led U of M to eight Big Ten Championships, three Big Ten Tournament titles, eight NCAA Sweet 16 berths and the quarterfinals of the 2016 NCAA Tournament. In 12 seasons as head coach she’s amassed a record of 261-77 to push her overall 22-year coaching mark to 426-146. In Big Ten action, she has a 122-6 record along with six perfect seasons. She’s one of two coaches in school history to amass at least 200 wins and is close to becoming the program’s all-time winningest coach.

She’s also led Michigan to nine 20-win seasons, including a program-best 26 wins in 2015 as the Wolverines swept the Big Ten regular season and tournament titles while advancing to the NCAA Tournament quarterfinals. Her teams have appeared in each of the last 12 NCAA
Tournaments.

Ronni arrived at Michigan after a decorated 10-year head coaching career at Florida International University in Miami from 1997-2007. The winningest and longest-tenured head coach in the history of FIU’s women’s tennis program, she compiled a career record of 165-71 as leader of the Golden Panthers.

She was a four-time All-American tennis player at Miami, winning the 1986 NCAA doubles championship and earning NCAA Senior Player of the Year honors in 1988. After receiving a business management degree from Miami in 1988, she played professionally on the WTA Tour for two years, achieving career-high world rankings of No. 30 in doubles and No. 78 in singles in 1989. Ronni was a two-time Virginia Slims of Puerto Rico doubles champion (1987, ‘89), a Virginia Slims of Aptos, Calif., doubles champion (1988) and a Virginia Slims of Wichita, Kan., singles semifinalist (1989) as a pro. She captured the 1984 Florida state singles championship as a senior at Miami Sunset Senior High School, and was also the 1984 USTA Florida State Closed singles champion. She was ranked No. 1 in the state during her last year of juniors.