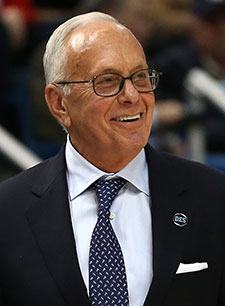 With a basketball resume that includes 39 years of coaching at the collegiate or professional level, enshrinement into the Naismith Memorial Basketball Hall of Fame’s Class of 2002, three ABA Coach of the Year awards, 2001 NBA Coach of the Year honors, and an NCAA Championship in 1988, Larry is well known to Detroit sports fans for having guided the 2003-04 Detroit Pistons to the NBA Championship in his first year as head coach.

He became the first coach to win a NCAA and NBA Championship and the 12th coach in NBA history to win an NBA title in his first season. Larry coached an NBA record eight different teams to the NBA playoffs and ranks fourth among all-time NBA coaches in playoff wins (100). He won his 900th career NBA game in 2004-05, becoming the seventh coach in NBA history to win 900 games. He also became the second Pistons coach to lead the organization to back-to-back NBA Finals appearances. Larry joined the Pistons after six seasons with the Philadelphia 76ers.

Larry has posted a winning record in 31 of his 39 seasons as a professional head coach or collegiate head coach and has compiled a 1,504-1,072 career record. In 27 NBA seasons he has a record of 1098-904, ranking eighth all-time among NBA coaches.

Hustle and defense are trademarks of a Larry Brown-coached team, and they’ve finished first in the division six times (1976-77 and 1977-78 with Denver; 1989-90 and 1990-91 with San Antonio; 1994-95 with Indiana and 2000-01 with Philadelphia). Prior to joining the Sixers, Larry spent four seasons as head coach of the Indiana Pacers and compiled a record of 190-138. The Pacers’ all-time winningest NBA coach, he took the team to the playoffs three times, including the Eastern Conference Finals twice. Before joining Indiana,
Larry was head coach for the Los Angeles Clippers, San Antonio Spurs, New Jersey Nets and Denver Nuggets, who he helped transition from the ABA to the NBA in 1976-77. After a two-year stint with the New Jersey Nets (1981-83), Larry spent the next five seasons as head coach at the University of Kansas, where he won the national championship in 1988.

As a coach, Larry draws on his playing days where he was a member of the 1964 gold medal U.S. Olympic basketball team. In 2000, Larry was assistant coach for the gold medal-winning men’s basketball team at the Sydney Olympic Games. He is the only U.S. male to both play and coach in the Olympics. Serving as head coach of Team USA at the 2004 Olympic Games in Athens, he led the team to a bronze medal. The three-time ABA All-Star holds the ABA record with 23 assists in a game and was Most Valuable Player of the ABA All-Star Game in 1968.