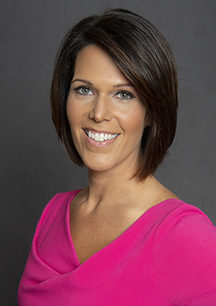 Earlier this year Dana completed her fourth season as sideline reporter for The NCAA Tournament, and earlier this summer CBS News named her a new co-host of “CBS This Morning Saturday.”

Dana graduated from U of M and began her career in Traverse City. She also worked in Sacramento as a weekend sports anchor before landing a job at ESPN as a studio anchor and then became an anchor on “SportsCenter.” She also continued in sports radio, filling in on “Mike and Mike” on ESPN Radio.
At ESPN she was part of the team that revamped “Cold Pizza,” building the show into one known for its interviews and off beat approach. Dana also became anchor of “XCenter” before returning to “SportsCenter” in 2012.

In January 2013 Dana helped launch CBS Sports Radio as one of its morning show hosts. She also joined CBS Sports TV working on the “Jim Rome Show” along with “Inside College Football & Basketball” on CBS Sports Network. In 2015 Dana gave up radio to return to TV full time with CBS “Sports and Spike.” As the host of “PBC on Spike” beginning in 2015 Dana is believed to be the first female boxing host for a nationally televised program. Inducted 2018